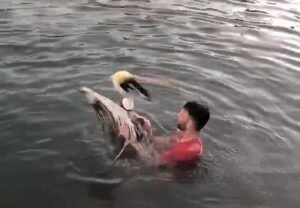 OCEAN CITY, Md. — A 31-year-old Maryland man is facing charges of animal cruelty after jumping into a harbor in Key West, Fla. and grabbing a brown pelican as it swam nearby.

In a video posted to the man’s Facebook page, William Hunter Hardesty can be seen peering over the edge of the water before jumping in and giving the pelican a unrequited hug. The brown pelican took a nip at Hardesty and flew away unharmed.

He was arrested by Maryland state troopers at an Ocean City hotel a day after a warrant from the Florida Fish and Wildlife Conservation Commission charged him with animal cruelty to migratory birds and the intentional feeding of pelicans.

Comments to social media referred to Hardesty as “cruel” and a “punk.” He shot back, “Next time ima eat him for dinner !! Wonder what they taste like.”

TheBirdWar.com does not endorse attacking birds, especially those protected under the federal Migratory Bird Treaty Act and Florida state law, as the brown pelican is.