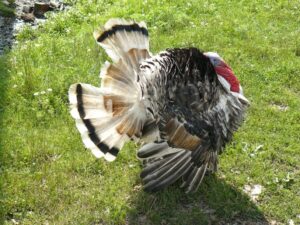 TOMS RIVER, N.J. — When you live in a community named after a male turkey, they are going to eventually think they own the place. And that’s exactly what’s happening here in Ocean County.

Wild turkeys are terrorizing an over-55 community, blocking ingress and egress, pecking at people and generally just being turkeys. It’s not pretty.

And if you think you can just shoo them away, you’d be sadly mistaken. Put out your hand and they will bite. Reports have suggested that the birds have even broken windows in homes to get at the residents who think they’re safe inside.

A spokesman for the Department of Environmental Protection said that Fish and Game is aware of the situation but offered no comment on the matter. Somewhat ironically, local animal control officers can’t provide any help as they are “not licensed to trap wildlife,” according to a report by News12NJ.