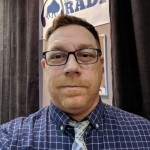 As is often the case, we’re at fault. Humans, that is.

A recent study suggests that hunter-gatherers in New Guinea some 18,000 years ago may have collected the eggs cassowaries — large flightless birds — before they hatched and then raised the chicks to adulthood.

The lead author of the study, Kristina Douglas, said, “This behavior that we are seeing is coming thousands of years before domestication of the chicken.”

Douglas,an assistant professor of anthropology and African studies at Penn State University, added, “And this is not some small fowl, it is a huge, ornery, flightless bird that can eviscerate you.”

And cassowaries *can* eviscerate you.

But it’s all good, because researchers claim that cassowaries can be easily “imprinted.” That means they become attached to the first thing they see , a la John Hammond with the dinosaur eggs in Jurassic Park. So in theory, they’re easy to raise.

Maybe that’s why they apparently kept them as pets 18,000 years ago.

Or maybe they were just dumb. After all, it didn’t turn out all that great for Hammond.